Tired and embarrassed, I sat wringing my hands at a grimy school desk damp with Texas humidity in my new community college lecture room. It reeked of teenage angst. I was tired because I had just gotten back from a mission trip, and was not yet accustomed to the time change. And at 19 years old having lived on my own two years prior, I definitely was not used to the nonexistent sleeping schedule of my toddler sibling that I was now sharing a room with. Yes, I was tired.

I was embarrassed. I really messed up my academics the prior semester at the university I was attending and as a result my GPA dropped too low. Because of my own bad choices, academic probation forced me to attend this community college. I didn’t want to be there, but deep down I didn’t want to be in school at all. I wanted to be back in the mission field, doing what I could to further the kingdom of God. Yet I could hear the voices of influential figures from my adolescence commanding me to push my passions into the “elective” section of my life and seek a future that will gain me the most financial success and highest status. I listened to the wrong voices.

So there I sat, unhappy and unsure. I was taking a philosophy class because a close friend that I roomed with during my mission trip was majoring in philosophy and I thought it might be interesting to learn more. I remember the first day of class the professor attacked Christianity. He was an atheist and wanted to shame any of us who didn’t believe what he did. Ironic, isn’t it? My attention was grasped and my heart racing. I didn’t have an opportunity to speak up yet, but over the next few weeks God rolled out a red carpet for me to speak. One day the professor asked those of us who believed in Jesus to raise our hands. My hand shot up as I quickly looked around to see my other classmates uniting with me and Jesus. Except to my shock, only one other person hesitantly raise their hand. Immediately the professor argued that Christianity couldn’t be true because faith isn’t real and there is no evidence that God could be real via the five sense humans have. I remember so clearly his shrill voice, “Can you see God? No! Can you smell God? Can you hear Him? Can you feel Him? Can you taste God?” At his last question, scattered, immature laughter and comments washed over the room. Blood pounded in my ears. The professor smugly crossed his arms in self-absorbed triumph as he leaned against his desk and quickly inhaled in preparation of moving on to another topic. That was my cue.

“I can”, I said a little quietly but firm amidst the chatter.

“Excuse me?”, the professor asked looking at me incredulously. I’ll never forget his facial expression as it dropped in mock confusion, but the truthful fear that only I could see hidden behind pride in his beady eyes. “You can taste God?”, he asked with a creepy smile as the classroom laughed on with him.

“I can. Jesus is the bread of life, I can taste Him and never hunger again. You could too” The professor was not expecting that and I could see his mind reeling for some intelligent response. “I can see Him, He’s here right now.”, I went on while never breaking eye contact with him. “I can smell His sweet aroma on the wind. I can feel Him holding me in the night. I can hear Him speaking to me, we talk every day.”

“You. talk to God?”, the professor’s emphasis on “you” and “God” was full of condescending doubt as he asked this final question with less humor and more hateful accusation. As if to say, “You of all people talk to the God of the universe?” His view of the Lord was so pitifully warped, and his lack of self-worth so deeply wounded. I looked at him with sorrow and responded gently, “Yes. I have faith in Jesus. And faith is enough evidence that God is real.” He looked at me a moment longer as though I was a math problem he couldn’t solve, and then he made some joke about my sanity and moved on.

He moved on, but something changed. Not just in me, but in him and in the classroom. As if I had broken through some small crack in his false truth facade. I saw several students regaining some of the confidence they had in their beliefs in Christ, though they didn’t express it outwardly. I could see the fire in their eyes for the same truth I proclaimed. I won’t lie to you, I did walk out of the class feeling like I was crazy.

I talk to God. Am I crazy? Did I really just tell fifty or more strangers, all staring at me, that I could taste God?! I am crazy. I’m weird and this is why I haven’t made friends yet. I’m out of my mind. Couldn’t You have caused an earthquake or something in the class room to prove my case, God?!

There was no glamorous ending to that semester in philosophy class. I actually ended up dropping the class because I found out I was pregnant a few weeks later and was totally wrecked in my first trimester sickness and fatigue. I never saw any fruition from the words I spoke boldly. But here’s what did happen. My faith grew! Though that professor did everything he could to destroy my faith in Christ, sharing my testimony actually increased my faith. And that’s enough.

Faith is real, tangible substance for all that we hope for. Faith is the evidence that science demands. Sure, that sounds like nonsense to the logical mind, but the logical mind is nonsense.

God reminded me of that encounter with a philosophy professor this morning because I’m currently experiencing God increasing my faith. Which I would even go so far to say that we always have an opportunity to let God increase our faith, however my eyes are more open to Him working right now than they ever have been. Not just within myself, but also in my life. My family has recently embarked on a journey to follow a dream that was sown in our hearts long ago, and it’s absolutely nerve-wracking. Or it was, until this morning when I remembered what all God has already done. That memory of His faithfulness, His love for us, was enough to cast out all fear.

This was the word God led me to this morning. God has given us the power to remember. We live our lives in first person, we see memories from our eyes. But what if God wants us to start looking at our lives from His eyes? To remember our memories with the story He wrote down in His journal about us? Our memories become new. Our lives become new. It’s time to remember the Lord’s wonderful works, He made them to be remembered because there is power in remembering. But don’t let the power stop within your own heart change, share your testimony of God’s love and faithfulness with the world.

“And they overcame him by the Blood of the Lamb and by the word of their testimony, and they did not love their lives to death.” (Revelation 12:11 NKJV)

Have you been washed with the Blood of the Lamb, Yeshua Jesus the Messiah?

If you haven’t received Jesus and want to, shoot me a reply at the bottom of this page and I can share with you how He has changed my life.

If you have received the Blood of Jesus then know that you have overcome the enemy, and write down times in your life where God showed up like a super hero to save the day.

Have you shared your testimony? Write down a few times where you did share your faith, and if you never have, write down moments where you felt like you could have. Ask God to show you how you can next time.

There are so many opportunities to share God’s wonderful works in your life. Social media, blogging, vlogging, checking out at the grocery store, etc. Pray for God to open moments for you to share your story, the one Jesus wrote for you, and step out in faith. God will do the rest! Not only do you depend on sharing your testimony for your own walk with God, but others need to hear your testimony to encourage them that they too can overcome the enemy!

Finally, re-read that last part of Revelation 12:11, “and they did not love their lives to death”.

What is God saying to you right now? Write it all down, God is speaking. Write. Remember. 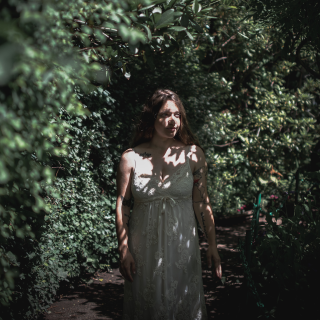 Mom, wife, worshipper, writer, coffee lover, Jesus follower, book nerd, adventurer, +infinite other things. Walk with me as I journey through life with eyes fixed on the One who changed me. See my stumbles and see my victories, but above all see God’s grace working in and through my life.

Be sure to check out My Story? to see what this blog is all about and reach out to me here.